The wheeled mobile robot has been created in 2013. The main reason why I have built this robot was the need to do tests of localization algorithms. The mobile robot can be used mainly in inspection tasks to keep an eye on the specific area. However, the advanced sensory system of robot provides a significant universality. Moreover, the robot equipped with a manipulator can be used in manipulation or transportation tasks.

A range of the robot depends mainly on the accumulators and implemented solutions for energy saving. Initially, it is assumed that robot can operate on area less than 0.5 hectares. Additionally, the robot can be load with 3 kg and a curb weight should be about 3.5 kg. Used drives should provide speeds of about 0.9 m/s on the flat ground.

The mechanical system has been designed in the student version of Autodesk Inventor 2013. The main design criterion was to obtain a compact, reliable and robust construction.

Mobile robot with a cover

Mechanical parts of the robot

As robot drives were used brushed DC motors Pololu 37D with hears 67:1 without integrated encoders. The motors have torque about 1.4 Nm and nominal rotational speed equal to 150 RPM and it consumes about 0.3 A without load. The stall current is similar to 5 A for every motor. The described parameters can be received with a 12 V power supply. It was estimated that robot with such drives may enter the hill with a slope about 45 o.

It was used Mobot MBW-120/55/4 wheels, which have hubs of plastic and rubber tread. The outside diameter of the wheel is 120 mm and the inner diameter is about 55 mm. Wheels can be used even on rugged terrain.

The power transmission was realized with a designed axle mounted to the wheel on one side and to the motor shaft on the other side. Every wheel has a corresponding bearing. Bearing seats were placed outside of the robot
body and were used 61901 2RS (12x24x6 mm) bearings.

To supply robot components like control modules or motors two lithium-polymer (li-poly) batteries were used (each has three cells). That kind of battery has very high discharge currents. The acceptable level of voltage is between 9.3 V and 12.6 V.

The robot is equipped with a dedicated power supply unit. It supplies other components of the robot and protects batteries. The impulse inverters were used to provide 5 V and 3.3 V for robot modules. Moreover, the power supply module has an auxiliary power line for stand-by mode and battery charging monitoring.

The hardware architecture of the robot was designed to implement localization approaches and other methods which will be developed in the future. The robot hardware consists of three parts:

Additionally, it was used encoders modules and distance sensors directly connected with the main module.

The hardware architecture of a robot

The idea behind the system is that the computer gains information about the robot state and environment using connected modules with sensors. The main unit process data and is responsible for localization and decision processes. Moreover, it controls robot drives through the motors module. The platform computer is connected with the ground station by Wi-Fi. On the ground, the station is running a user application where the user can control a robot and supervise its work.

To control motors was designed dedicated hardware module. The motors control module supports four DC motors and four incremental encoders with quadruple outputs. The module will be described more precisely in another post.

To provide robot information about its state and environment state it was designed the sensors module. It retrieves data from sensors like an accelerometer, gyroscopes, compasses, distance sensors, and GPS module. Then it sends it to the host computer.

As a higher-level control unit, it was used Raspberry Pi B minicomputer. It is cheap and sufficient for that purpose. Moreover, Raspberry Pi has a very large community what is helpful in the development process. Features of Raspberry Pi: 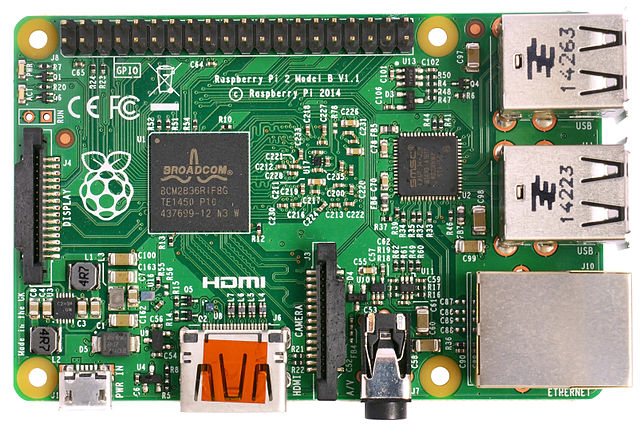 On the computer is running Raspbian system based on Debian version but optimized to RPi platform. The software of the robot was written in C and C++. Moreover, for computer configuration was used bash scripts.

All robot modules communicate with I2C interface. The Raspberry Pi is the master device and others are slaves.

Communication with user station was realized with wireless network card TP-Link WN725N because for this card are available drivers.  As a user computer, it was used notebook with a Windows 7  system. It was created hot-spot on the computer with tool netsh . The initialization of the connection process needs two steps. The first one is to set the parameters of connection with the following commands:

Next, the connection should be established.

After that, the robot can connect to Raspberry Pi for example by SSH (Secure Shell) protocol.